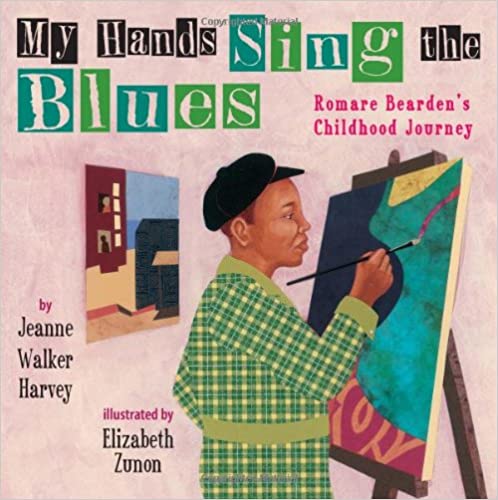 My Hands Sing the Blues

As a young boy growing up in North Carolina, Romare Bearden listened to his great-grandmother’s Cherokee stories and heard the whistle of the train that took his people to the North—people who wanted to be free. When Romare boarded that same train, he watched out the window as the world whizzed by. Later he captured those scenes in a famous painting, Watching the Good Trains Go By. Using that painting as inspiration and creating a text influenced by the jazz that Bearden loved, Jeanne Walker Harvey describes the patchwork of daily southern life that Romare saw out the train’s window and the story of his arrival in shimmering New York City. Artists and critics today praise Bearden’s collages for their visual metaphors honoring his past, African American culture, and the human experience. Elizabeth Zunon’s illustrations of painted scenes blended with collage are a stirring tribute to a remarkable artist.

My Hands Sing the Blues is the recipient of the 2012 IRA Childrens and Young Adults Book Award-Primary Non-Fiction, as well as the gold winner of a Moonbeam Children's Book Award in the category of Picture Book-All Ages.

This review from Hazel Rochman, Booklist captures the energy of the book...Bearden called his art visual jazz, and this handsome, fictionalized picture-book biography stays true to his rich connections to blues rhythms. With well-chosen quotes (all documented in appended notes), the rhyming first-person narrative in Bearden s voice remembers the people and places of his childhood roots, and his memory whirls back to his growing up in the rural South and then his train journey north to Harlem. Echoing Bearden s distinctive style, the richly textured collage art combines original paintings with paper, fabrics, and photos to show Bearden as a small boy watching trains pass until he and his parents get on a train themselves, and he sees the world whizzing past: A patchwork quilt of greens and gold. The moving climax shows and tells Bearden s approach to work, blending his roots with improvisation: "When I put a beat of color on an empty canvas, / I never know what s coming down the track". A lively introduction to the artist for young children and for older readers, too. --Hazel Rochman, Booklist, November 1st Issue
Author Jeanne Walker Harvey became fascinated with Romare Bearden's amazing collages while a docent at the San Francisco Museum of Modern Art. She has a degree in English literature from Stanford University.

Illustrator Elizabeth Zunon was born in Albany, NY and grew up in the Ivory Coast of West Africa. She returned to the USA to attend Rhode Island School of Design where her love for children's books and painting fluorished. She now lives back home in Albany, New York. This is her first illustrated picture book.