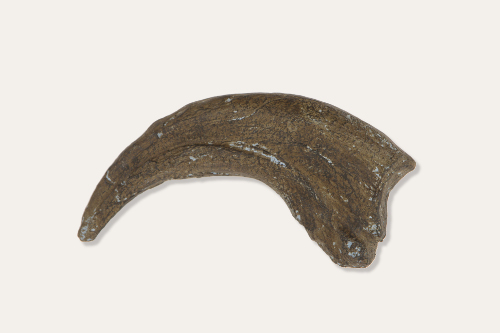 This claw is an exact replica of one belonging to Dryptosaurus aquilunguis (drip- toe-SORE-us ah-quill-UN-gwiss), a meat-eating dinosaur that roamed parts of eastern North America about 70 million years ago.

Along with Hadrosaurus foulkii, it was one of the first dinosaurs discovered in North America.  The New Jersey State Museum features the first complete mount of two fighting Dryptosaurs in the Written in the Rocks galleries.

This claw is part of the only known skeleton of Dryptosaurus. It was found in 1866 in a New Jersey quarry and brought to the Academy of Natural Sciences in Philadelphia, where they remain to this day.  Paleontologist Edward Drinker Cope described the specimen and named it Laelaps aquilunguis. However, it was later determined that the name Laelaps had already been assigned to a genus of mite, and in 1877 Cope's rival, Othniel Marsh, changed the dinosaur’s name to Dryptosaurus aquilunguis. In a letter to his father in 1866, Cope described his new species of dinosaur as “the devourer and destroyer of…Hadrosaurus, and of all else it could lay claws on!”