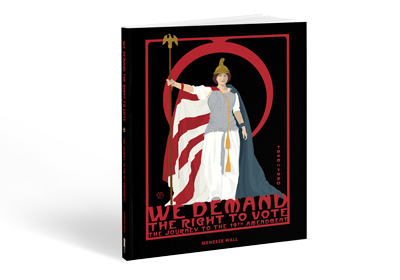 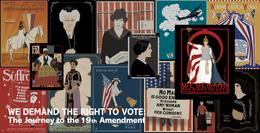 We Demand the Right to Vote

We Demand The Right To Vote: The Journey to the 19th Amendment
Written & Illustrated by Meneese Wall

About the Author:
Meneese Wall is a graphic artist and writer whose creations focus on American women’s history. Her recent collection of artwork and accompanying illustrated book highlight women’s 19th and 20th century struggle for social and political equality as they fight for the right to vote. Inspired by historical events, people, quotes, and memorabilia, Meneese awakens our attention to women’s pivotal influence on our past and their consequential effects on today’s reality.  She lives in Santa Fe, New Mexico.

On August 18, 1920, Tennessee became the thirty-sixth and final state needed to ratify the Nineteenth Amendment to the United States Constitution guaranteeing women the right to vote.

The right of citizens of the United States to vote shall not be denied or abridged by the United States or by any State on account of sex. Congress shall have power to enforce this article by appropriate legislation.

Book’s Narrative Summary:
We Demand the Right to Vote: The Journey to the 19th Amendment introduces readers to American women’s civil rights movement known as “Women’s Suffrage”—women’s 72-year struggle for social and political equality that culminated in their winning the right to vote via the 19th Amendment. With that right well in hand, women could change their worlds.

Written in a conversational, easy-to-read style, this illustrated historical account commences with Native American cultural influences and continues with women’s conventions, arrests, trials, petitions, battles won, and those lost to reveal society’s slow acceptance of women’s involvement outside of their socially prescribed realm. Throughout the book’s journey, enchanting artwork—inspired by historical events, people, quotes, and memorabilia—visually illustrates the various pivotal moments chronicled in each chapter.

We Demand the Right to Vote is an overview from the national perspective of this defining period in women’s history—which is not taught in our schools, nor is it part of the common knowledge of our country’s overall history. Both a history book and an art book, We Demand The Right To Vote is ideal for audiences of all ages—an enjoyable, beautiful, and rousing read worth further exploration.