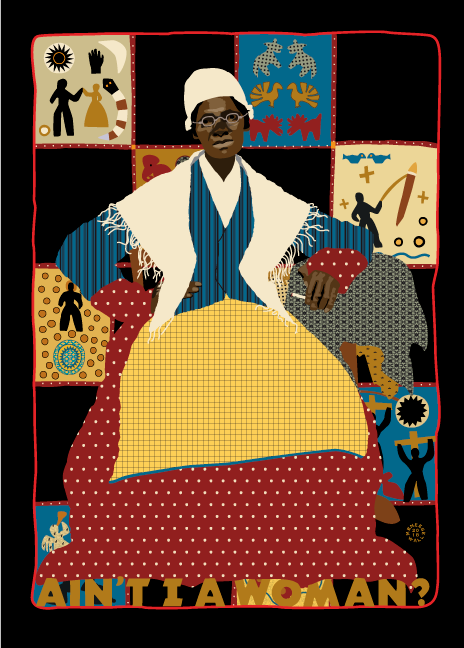 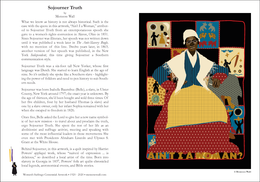 What we know as history is not always historical. Such is the case with the quote in this artwork, “Ain’t I a Woman,” attributed to Sojourner Truth from an extemporaneous speech she gave to a women’s rights convention in Akron, Ohio in 1851. Since Sojourner was illiterate, her speech was not written down until it was published a week later in The Anti-Slavery Bugle, with no mention of this line.
Sojourner was born Isabelle Baumfree (Belle), a slave, in Ulster County, New York around 1797; the exact year is unknown. By the age of thirteen, she’d been bought and sold three times. Of her five children, four by her husband Thomas (a slave) and one by a slave owner, only her infant Sophia remained with her when she escaped to freedom in 1826.
Once free, Belle asked the Lord to give her a new name symbolic of her new mission - to travel about and proclaim the truth, ergo Sojourner Truth. She spent the rest of her life as an abolitionist and suffrage activist, meeting and speaking with some of the most influential leaders in those movements. She even met with Presidents Abraham Lincoln and Ulysses S. Grant at the White House.

For the health and safety of our members, visitors and staff the New Jersey State Museum is closed at this time. We look forward to welcoming you back to the museum and planetarium but will continue to serve you through virtual programs and at-home activities. Please visit our Facebook, Twitter and Instagram pages as well as our website for news and virtual offerings.