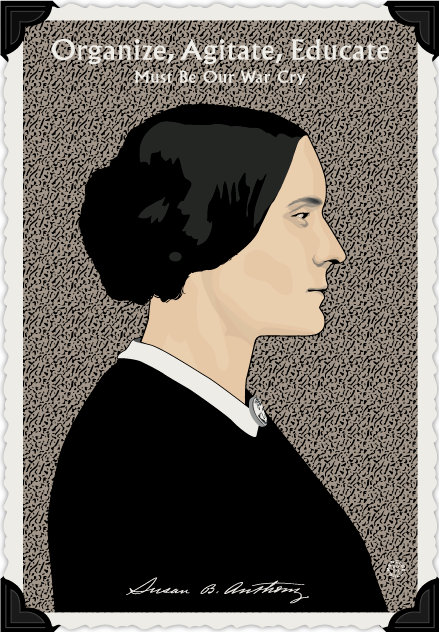 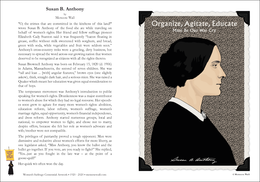 Susan Brownell Anthony was born on February 15, 1820 (d. 1906) in Adams, Massachusetts, the second of seven children. She was “tall and lean ... [with] angular features,” brown eyes (one slightly askew), thick, straight dark hair, and a serious mien. She was raised a Quaker which meant her education was given equal consideration to that of boys.
The temperance movement was Anthony’s introduction to public speaking for women’s rights. Drunkenness was a major contributor to women’s abuse for which they had no legal recourse. Her speeches soon grew to agitate for many more women’s rights: abolition, education reform, labor reform, women’s suffrage, women’s marriage rights, equal opportunity, women’s financial independence, and dress reform. Anthony started numerous groups, local and national, to empower women to fight; and chose not to marry, despite offers, because she felt her role as women’s advocate and wife/mother were not compatible.
The privileges of patriarchy proved a tough opponent. Men were dismissive and reductive about women’s efforts for more liberty, as one legislator asked, “Miss Anthony, you know the ballot and the bullet go together. If you vote, are you ready to fight?” She replied, “Yes...just as you fought in the late war – at the point of a goose-quill!”
Her quick wit often won the day.