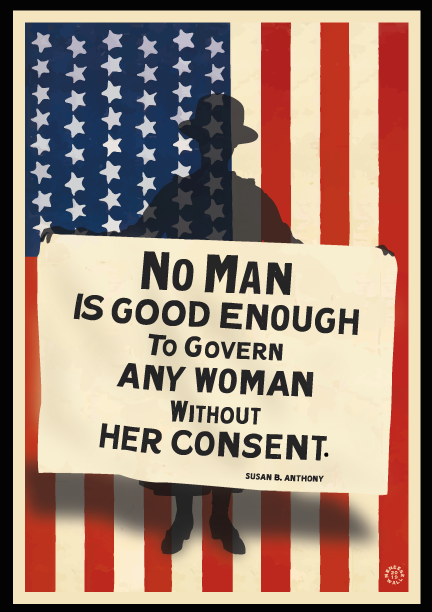 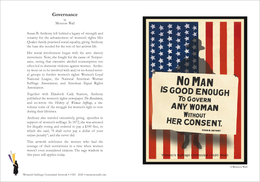 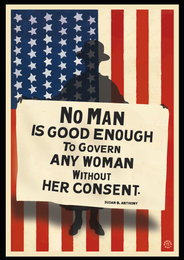 Created by Meneese Wall, a graphic artist and designer from Santa Fe, NM. Her unique and beautifully designed artwork celebrates the women, quotes, events and memorabilia that defined the suffrage movement. Meneese developed a series of iconic images in commemoration of the passing of the 19th Amendment. The notecards and art print feature a striking illustration and text  describing the historical significance.

Susan B. Anthony left behind a legacy of strength and tenacity for the advancement of women’s rights. Her Quaker family practiced social equality, giving Anthony the base she needed for the rest of her activist life.
Her social involvement began with the anti- slavery movement. Next, she fought for the cause of Temperance, seeing that excessive alcohol consumption too often led to domestic violence against women.  Anthony went on to be involved with and/or co-found several groups to further women’s rights: Women’s Loyal National League, the National American Woman Suffrage Association, and American Equal Rights Association.
Anthony also traveled extensively, giving  speeches in support of women’s suffrage. In 1872, she was arrested for illegally voting and ordered to pay a $100 fine, to which she said, “I shall never pay a dollar of your unjust penalty”; and she never did.
This artwork celebrates the women who had the courage of their convictions in a time when women weren’t even considered citizens. The sage wisdom in this piece still applies today.