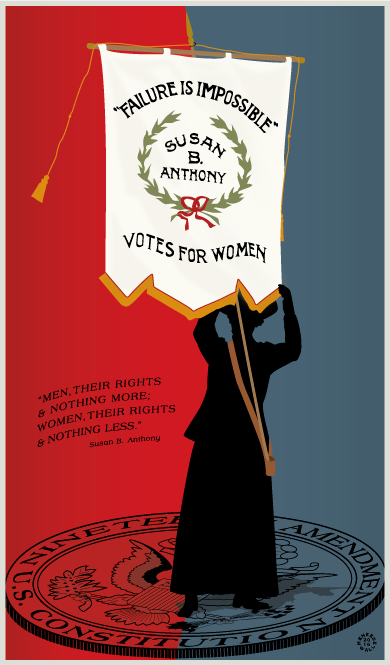 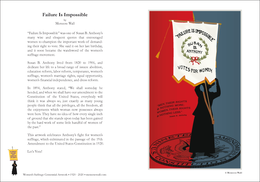 “Failure Is Impossible” was one of Susan B. Anthony’s many wise and eloquent quotes that encouraged women to champion the important work of demanding their right to vote. She said it on her last birthday, and it soon became the watchword of the women’s suffrage movement.

In 1894, Anthony stated, “We shall someday be heeded, and when we shall have our amendment to the Constitution of the United States, everybody will think it was always so, just exactly as many young people think that all the privileges, all the freedom, all the enjoyments which woman now possesses always were hers. They have no idea of how every single inch of ground that she stands upon today has been gained by the hard work of some little handful of women of the past.”

This artwork celebrates Anthony’s fight for women’s suffrage, which culminated in the passage of the 19th Amendment to the United States Constitution in 1920.
Let’s Vote!

For the health and safety of our members, visitors and staff the New Jersey State Museum is closed at this time. We look forward to welcoming you back to the museum and planetarium but will continue to serve you through virtual programs and at-home activities. Please visit our Facebook, Twitter and Instagram pages as well as our website for news and virtual offerings.