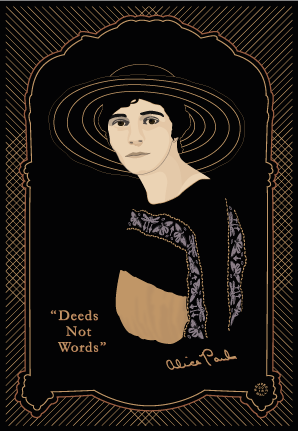 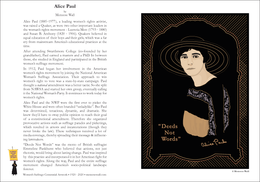 Alice Paul (1885-1977), a leading women’s rights activist, was raised a Quaker, as were two other important leaders in the woman’s rights movement - Lucretia Mott (1793 - 1880) and Susan B. Anthony (1820 - 1906). Quakers believed in equal education of their boys and their girls, which was a far cry from mainstream America’s educational practices at the time.

In 1912, Paul began her involvement in the American women’s rights movement by joining the National American Woman’s Suffrage Association. Their approach to win women’s right to vote was a state-by-state campaign. Paul thought a national amendment was a better tactic. So she split from NAWSA and started her own group, eventually calling it the National Woman’s Party. It continues to work today for women’s rights.

Alice Paul and the NWP were the first ever to picket the White House and were often branded “unladylike”. But Paul was determined, tenacious, dynamic, and dramatic. She knew they’d have to sway public opinion to reach their goal of a constitutional amendment. Therefore she organized provocative actions such as suffrage parades and picketings, which resulted in arrests and incarcerations (though they never broke the law).  Along the way, Paul and the entire suffrage movement changed America’s socio-political landscape forever.