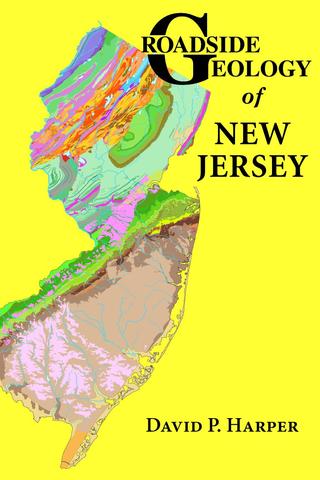 From the glacially scoured quartzite ridge that hosts the Appalachian Trail to the spectacular columnar basalt of Orange Mountain, New Jersey packs a boatload of geology into a small area. Its nineteenth-century marl pits were the birthplace of American vertebrate paleontology, bog iron deposits in the Pinelands were used to produce cannonballs for the Revolutionary War, world-famous fluorescent minerals are found with zinc deposits in the Franklin Marble, and the coastal plain sediments contain convincing evidence of the meteorite impact that killed the dinosaurs.
This absorbing book opens with an overview of the state’s geologic history and proceeds with 13 road guides that unearth the stories behind the state’s rocks, sediments, and barrier islands. More than just a guide, Roadside Geology of New Jersey is chock-full of insightful discussions on such timely topics as sea level rise, climate change, and uranium mining. Get the scoop on why so much sand moves during superstorms such as hurricane Sandy, and learn about more than a century of efforts to stabilize the beaches along the Jersey Shore.