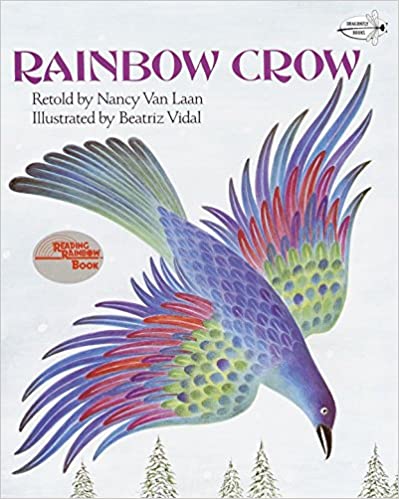 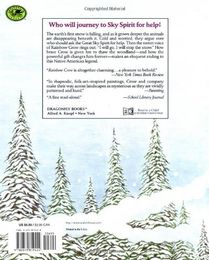 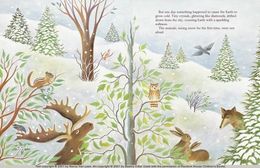 Who will journey to Sky Spirit for help?

This story, retold by Nancy Van Laan and illustrated by Beatriz Vidal, is "a Native American legend that will be a fine read-aloud because of the smooth text and songs with repetitive chants. The illustrations create a true sense of the Pennsylvania Lenape Indians and their winters."--School Library Journal.

The following story of how the Lenape legend became Rainbow Crow is excerpted from the Rainbow Crow Facebook page of author Nancy Van Laan:

'So many have asked me how my story of Rainbow Crow came to be.  The original Lenape legend wasn't called "Rainbow Crow." The legend was originally called "Crow and Grandfather Fire." It had never been written down before I retold it.Chief Bill Whippoorwill Thompson gave me permission to retell this legend. It's important to note that all legends are sacred, in the sense that without permission from the original teller, they should not be retold at all.Since I write for a very young audience, my retelling was worded in such a way as to appeal to them. Even the ending was changed to make it more satisfying for a child to hear or read.

In the original legend's ending, Crow (yes, simply Crow -- not Rainbow Crow) was given the gift of Freedom. I changed it to the crow being proud to be black crow with feathers full of tiny rainbows.I was afraid to show this newly told story to the Chief. I was fearful that he would say that I couldn't retell it this way.When he came with another storyteller to my house to read the book, I was very anxious. As I watched him carefully read the words I had written, I saw a tear trickle down the side of his cheek. "Oh, no!" I thought. "He is hurt by it."But then, Chief Bill Whippoorwill Thompson looked up at me. He said, "You have seen through our eyes. You are truly one of us."Bill is now in the land of the spirits, but I will forever hold him deeply in my heart.The Turtle Clan of the Lenape have made me an honorary member and Keeper of the Legend. I have a responsibility to uphold this honor."